…isn’t me (what a shock!) and officially isn’t going to be me. Semi-finalists were supposed to be contacted by May 1st. The cook-offs themselves start this weekend. So my effort didn’t make the cut.

Oh well, I had fun. And now I can let you all know what I made and give you the pictures…

The rules were that we had to use four out of the following five ingredients: 1. boneless beef (any cut) 2. mushrooms (fresh or dried, any type), 3. red bell peppers, 4. shallots, 5. fresh rosemary.

I used chateaubriand (the nicest steak cut available at the store that night that fitted what I had planned), crimin muchrooms, shallots and fresh rosemary from the garden.

We also had to use three other ingredients of our choice and any ingredients at all from a ‘pantry’ list.

If you read the original entry you will see that I also handicapped myself by starting the night before the entries were due in.

This is the plated result.

I thought it not only looked good, but that the official recipe which follows was also good.

8 medium to large cloves of garlic

1.Take half a stick of butter out of the refrigerator to thaw.

2.Grate off the zest of the lemon.

5.Place all the meat flat between two pieces of plastic wrap and pound each piece of meat through the plastic with a heavy object like tenderizing hammer or a rolling pin for about ten seconds per piece until it is about Â½ an inch thick. Put the meat aside and let it rest.

6.Thoroughly wash the cilantro and trim just the roots off. You need the stalks as well as the leaves. Cut the bunch of cilantro in half or thirds and put it in the blender. Peel six of the cloves of garlic and add them to the blender. Add the juice of the lemon and 1 tablespoon of balsamic vinegar. Add 3 tbsp of olive oil and the other 1 tsp of salt. Blend it all thoroughly together to a smooth green paste.

7.Carefully wipe the mushrooms clean with a paper towel and remove their stalks.

9.Using a fork thoroughly mash the butter, garlic and rosemary together.

10.Put a small amount (1/6 of a tsp) of the rosemary garlic butter in each mushroom cap and then carefully spread the rest evenly over the meat.

12.Heat 2 tbsp of olive oil in a large cast iron skillet or non-stick frying pan. You may need two pans or to cook the meat in two batches. When it gets hot, swirl the oil in the pan, then place the shallots and mushrooms around the edge and the meat in the middle.

13.Cook for five minutes, stirring the shallots a little but try not to disturb the mushrooms or meat.

15.Serve with the browned shallots on top of the meat and a tablespoon of cilantro sauce on top of it all and the mushrooms on the side. Put more of the cilantro sauce in a bowl in case anyone wants more.

16.Accompany with a green salad or grilled tomatoes and pasta. The pasta can be made with a simple marinara sauce or just olive oil and parmesan. Alternatively, use the rest of the cilantro sauce as a sauce for the pasta and mix it in thoroughly.

And here are some pictures of stages along the way.

Cilantro sauce ingredients that go into the blender and end up like the sauce on the steak in the first picture. 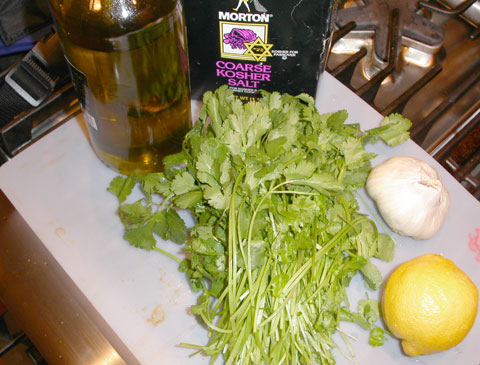 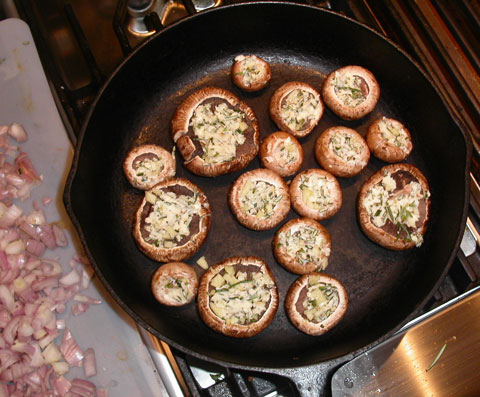 Steak and mushrooms and shallots cooking in the pan. I cooked it both ways shown – in a non-stick pan and in my trusty cast iron skillet. To my complete shock, the non-stick pan way came out better (although there wasn’t much difference really). 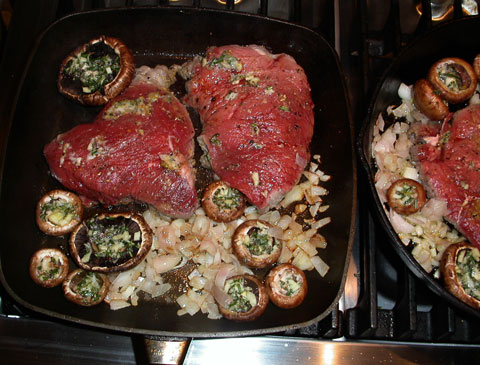 The steak and mushrooms cooked. It’s a little smoky – I like to cook steak on high heat. Note the slightly caramelized shallots.