This may be the best dish I have ever come up with. I have been thinking about this for a couple of weeks and had come up with about five alternatives. At first I was going to make them all, but reality and the about:blank spyware attack software crept up on me and swallowed my time. Hence my missing the official deadline – it is 12:20 AM here in California as I type this.

It may have all been worth it, however. As time passed, the more convinced I became that sage and Parmesan were the right combinations for gnocchi. I have always liked potatoes and cheese and potatoes and sage. Initially it was just going to be plain gnocchi with a browned butter and sage sauce and Parmesan on top. Good thing I winged it in the end.

Of course, the first step to making gnocchi is to have some mashed potatoes just lying around. Those of you who have read my ramblings in the past know that I like reusing things. I have never actually made gnocchi completely from scratch with potatoes purposely cooked for just that reason – even when I made Marcella Hazan’ divine spinach and ricotta gnocchi.

So I needed mashed potatoes. Fortunately, I have two very hungry and very growing kids. The kids like mashed potatoes – a LOT. In fact, the main reason we don’t have more gnocchi than we do at our house is because I usually underestimate and the kids eat all the mashed potatoes. The same reason accounts for never making any of the other great mashed potato dishes like shepherds pie. So, of course, I underestimated again. But fortunately this time I wasn’t all that hungry myself. (A long story involving falling off a ladder, inhaling epoxy solvents, bursitis and a really, really bad day). I ended up with about half a pound of mash – rather less than the pound I was shooting for, but doable.

I made the kids (and us) a pretty nice supper of mashed potatoes, fresh green beans and a lovely lamb, tomatilla, garlic, basil, honey and lemon dish. That can be a bonus recipe at the end.

So here I am, 11PM. Everyone else has gone to bed finally and I have caught up in the meantime on just how bad our budget is now that I have been unemployed for over 3 months. And now a brainwave strikes – how about some chili? A little heat never hurt anyone and it will give the whole thing that little boost it needs.

Without further ado, here is a picture of the finished product on a plate.

It tastes about ten thousand times better than it looks, too – bursting with sage and salty cheese and earthy potato and nutty butter and little chili flake bombs.

Gnocchi with a Browned Sage and Chili Butter Sauce

and for the sauce

Get a large pot of water boiling on the stove. Put all the ingredients for the gnocchi in a mixing bowl and carefully mix them together until they are just evenly mixed. Spread some flour on a board and flatten the gnocchi dough out until it is about half an inch thick.

Break pieces off in little disks about an inch and a half across and dimple them with a fork by pushing the back of the fork into the center of the disk. Put the raw gnocchi aside and make the sauce. 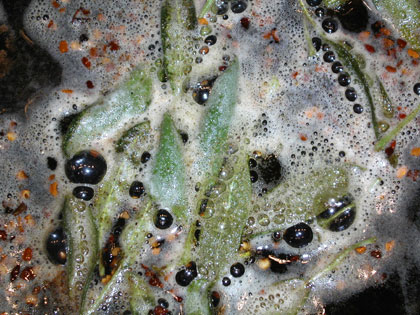 The water should be boiling by now. Gently drop the gnocchi one by one into the water. About three minutes later they will start to float up from the bottom of the pot. As they do, scoop them out, preferably with a slotted spoon and pile on a serving dish.

As soon as they are all out, pour the sage, chili butter sauce evenly all over the gnocchi and garnish with plentiful shavings of Parmesan. 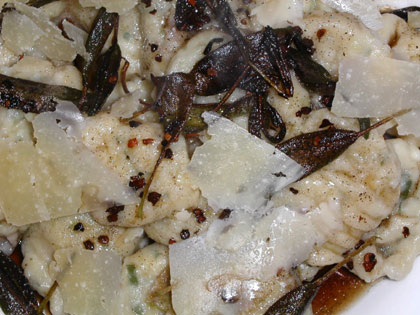 This should be just the right amount for two.

Lamb and Tomatillas with garlic, basil honey and lemon

Finely chop eight cloves of garlic. Slice about a pound of tomatillas into halves. Cut up about half a pound of left over roast lamb into small slices. Shred about a cup of fresh basil leaves. Put about three tablespoons of olive oil in a frying pan and let get hot. Add the garlic and cook until it starts to turn brown and crisp. Add the tomatillas and cook until they soften and release juices. Add the lamb slices and let them get warm, add the honey, lemon and basil and thoroughly mix. Turn off the heat and serve.