Back from vacation. Georgia, New Orleans and Crawfish perfection

Sorry about the break. We were on vacation in Georgia and New Orleans. Now Georgia was pretty much a culinary wasteland apart from eating fantastic Iranian food at the in-laws. That was at least expected. New Orleans on the other hand was a disappointment. Many people keep saying that the best food in the country or some of the best food in the country is in New Orleans. I completely disagree. I think New Orleans is the ultimate food destination for people from the South and the Midwest – and for someone from Georgia, I can see how it would be considered the best food in America. But in five days I only had two meals that would be considered good by my fresh Californian standards and one of those was again a home cooked spread. Now, admittedly we didn’t go to places like the Commander’s Palace, but nowadays EVERYWHERE has good expensive restaurants. What I did notice was that below the top tier and on down, the comparison with Bay Area restaurants lost out everytime. For an example, if an entree costs more than $20 then I should at least feel I would have trouble making it myself. Instead I felt I would have trouble NOT doing better. 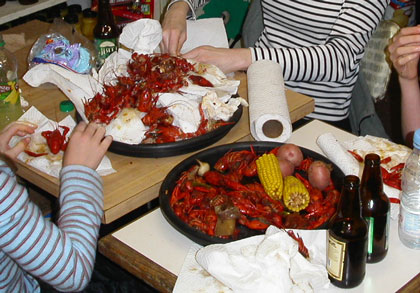 So, of course, the best meal we had was in fact the cheapest. Walking past the Royal Grocery on Royal in the French Quarter we spotted a crayfish boil nearing completion. It had clots of bay leaves, coriander seeds, mustard seeds and lots of other spices. It had whole oranges, lemons, onions. It had corn and potatoes. It smelled very good. It was $3 per pound and each pound came with half an ear of corn and a tater. Beer was in the refrigerators. The ambiance was gritty and real (aka rather dirty and intercut with things like homeless people haggling for food and carriage drivers running in to get cigarettes and crayfish to go. And the crawdads? They were sublime. Spicy enough to tongue- and lip-tingle. Salty, full of flavor. We, including the kids, twisted, sucked and pinched to our hearts’ content. For drinks, five pounds of crayfish, corn and potatoes and tip we paid $25. As Grace said, ‘that’s cheaper than McDonalds!” It was not only the best meal we had all trip, it was the healthiest.

Back in the Bay Area we inhaled some fresh vegetables and felt the rendered fats beginning to drain from our system. I also cracked the beer which is MUCH richer than expected but probably the best I have made. More on that later